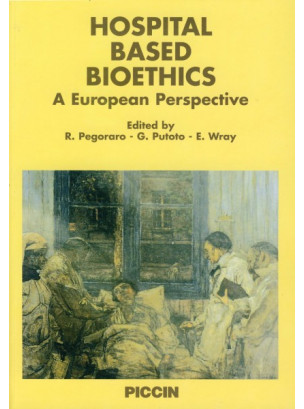 Hospital based Bioethics - A European Perspective

PrefaceAdvances in science and technology have led to profound changes in health care, yet despite the many benefits these advances bring there are increasing concerns about the way such technologies are applied. This in turn has... Maggiori informazioni

Advances in science and technology have led to profound changes in health care, yet despite the many benefits these advances bring there are increasing concerns about the way such technologies are applied. This in turn has stimulated a flourishing of academic interest in ‘bioethics’, but the degree of interest in and engagement with bioethics at the clinical level is less clear. Hospitals bring together a variety of professional and non-professional groups in the place where clinical dilemmas are daily events, and would seem ideal places to conduct an ongoing bioethics dialogue. A European Commission funded project set out to discover just how extensive bioethics education in hospitals throughout Europe is, and what could be done to promote it. This book is one of the outcomes of that project, described below.

The European Hospital (-based) Bioethics Program

and development of this book

A survey undertaken as part of the project reveals the provision of bioethics education in hospitals to be patchy, or in some cases almost non-existent, although many institutions express a desire to address the situation.

Once the survey work was completed the partners worked together to create an outline of an introductory course in bioethics that would offer a flexible framework on which to establish a programme of bioethics education for European hospital workers. This course was tested in the participant countries and evaluated. The chapters that make up this book are based on the material delivered during that course, and reflect the diversity of approaches and backgrounds of the various European authors. One of the important outcomes of the EHBP was to stimulate debate and promote dialogue between experts from various European countries, and to share the wealth of knowledge that they have accumulated over the years.

Likewise, the purpose of this book is to stimulate debate, increase knowledge and promote inter-disciplinary dialogue about ethical issues associated with the provision of medical care in Europe, particularly hospital based care. By providing a common background, language and approach, it is hoped that a wider audience will be empowered to participate in discussions about these important issues. Increased mobility of health care professionals within Europe requires professionals and other hospital staff to discuss and debate health care and bioethical issues within a common framework. In fact, there are already some successful attempts at ‘European harmonisation’ in ethics: although these trends are strongest in research, they are beginning to occur in clinical care as well.

How to use the book

The book is intended to provide a framework that can be used as a starting point for those interested in teaching or learning about bioethics. Although the resource can be read from cover to cover as a whole, each chapter is presented as a stand-alone unit that is laid out in a similar format, with the following headings:

The purpose of this is to provide some possible approaches and stimulate further debate rather than to provide a fully comprehensive resource, which would require a much larger volume than intended by this project.

Although the book does not contain an exhaustive account of all ethical issues that arise within health care institutions, it does offer a European-based perspective on some of the main issues and approaches used when considering them. Each of the authors comes from a European background, and therefore is in a position to present this uniquely European perspective, something that is frequently lacking in bioethics literature.

In the first chapter, Eugenijus Gefenas looks at how modern bioethics has developed out of an ancient tradition of professional regulation that has been a feature of medical practice from its earliest times. This chapter begins to answer the important question of why bioethics is so important, and how modern bioethics has developed hand in hand with legal developments as a means of regulating health care. Ancient codes of professional conduct have been supplanted by newer versions that still play an important role in professional regulation, but the use of codes and reliance on them has been supplemented and strengthened by legislative moves and the impact of the concept of ‘human rights’ enshrined in the European Convention on Human Rights. The UK case of Diane Pretty is used to illustrate the potentially far-reaching impact of this legislation on the lives of Europeans in all spheres, particularly health care.

In the second chapter, Marc Guerrier outlines the alternative approaches to ethical decision making in most common use, and describes two fundamental principles that are essential to our modern understanding of health care: primum non nocere and confidentiality. He then explores the use of ‘principles’ in resolving ethical dilemmas, first considering the famous ‘four principles’ of Beauchamp and Childress – autonomy, beneficence, non-maleficence and justice – before moving on to examine more recent thinking that has resulted in the development of principles more in keeping with a European outlook – autonomy, dignity, integrity, vulnerability. All this is put into context with a European example – the Convention of Oviedo – before he considers the use of principles in clinical practice.

The later part of the book deals with more specific ethical issues relevant to health care. In the third chapter Giovanni Putoto, Renzo Pegoraro and Andrea Semplicini consider the difficult and contentious issue of resource allocation in health care, from the level of the doctor faced with an individual patient to the larger decisions that must be made at institutional level on which services to provide, and to whom. A brief comparison between various international approaches to resource allocation, including the famous example of the Oregon Plan, helps to illustrate the dilemmas and difficulties inherent in providing health care within a limited budget.

In chapter four Franz Josef Illhardt starts with the proposition that using ethical principles is an essential first step in the resources required for medical decision making. Thus, he sets out the changes in patient-health care professional relationship that have seen a move from professional paternalism to an approach that supports and encourages patient autonomy, and explains why special methods of conflict resolution have become a bioethical imperative.

Issues at the beginning of life are then considered by Søren Holm in chapter five, who asks who should make proxy decisions on behalf of children, and how. The ethical problems that manifest in pregnancy are addressed, before concluding with some words on prenatal diagnosis and abortion.

This chapter is followed by Tomasz Brzostek and Zbigniew Zalewski’s chapter on issues that arise at the end of life, particularly in the context of modern life-prolonging technologies. They ask what we mean by the notions such as ‘end of life’ and ‘terminal’ illness, and explore the options available in terms of treatments and care provision. The difficult subject of euthanasia and its relationship with notions of self-determination and slippery slopes are discussed, along with the impact on society of recent moves to loosen the traditional prohibition on the taking of life.

In the next chapter Søren Holm considers some of the particular ethical difficulties that arise in the treatment and care of the mentally ill. He outlines why mental illnesses and their treatment are different and what special features of these disorders require consideration, before moving on to discuss some of the more controversial and ethically challenging aspects of certain psychiatric treatments.

Norbert Steinkamp then looks at some of the practical issues involved in providing an ethics service within the hospital setting in chapter eight. He considers the historical development of hospital ethics support and outlines various models of providing such support, before explaining the purpose, goals and tasks of hospital ethics committees. He then moves on to consider appropriate modes of implementation of clinical ethics support in hospitals, using a European model as an example.

The book concludes with a chapter on research ethics by Josef Glasa. Regulation of medical research in Europe has become increasingly harmonised, firstly by the International Conference on Harmonisation and more recently by the European Union Directive that has transformed the way that research on medicines is conducted in Europe. In this chapter the author outlines basic research methodologies before moving on to look at the relevant ethical principles in more detail. He then considers the important role of research ethics committees in research oversight.

Each chapter concludes with a reference and further reading list that will guide the reader towards the most relevant texts and articles that will offer further scope for self-study.